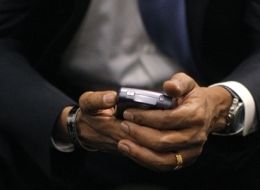 The introduction
Of mobile has aided the
Political sphere

The introduction of and advancements in mobile technology have fundamentally changed the way that citizens are able to participate in politics. Facilitating information exchange as well as donation transaction, mobile has empowered citizens to make increasingly informed voting decisions and to effortlessly make campaign contributions. Leaving Anthony Weiner’s full frontal antics incident as a topic of conversation for another time, let’s take a look at two ways in which mobile has both facilitated and strengthened the political process.

Mobile reaches demographics that could not have been reached prior

The Obama campaign was a convincing example of social media success that broadened political reach and engendered citizen action. Finding that there was a substantial demographic of 18- to 29-year-olds that could not be reached via contact calls during months leading up to the election, Obama advocates decided that another approach had to be taken. Recognizing the influence of Facebook, advocates launched an initiative in which 600,000 people sent out Facebook messages to approximately 5 million people as a call to action.[1] The initiative received a 20% response rate, much higher than the average .12% response rate that email initiatives receive.[2] And when you take into account that 18.7% of Facebook’s monthly users access the network via smart phones alone, the success of the initiative highlights the utility that mobile and, of course, social has provided and will continue to provide for campaigns into the future.[3]

A powerful campaign is driven by quality minds and backed by a loaded purse. With knowledge of this, the quality minds behind the Obama campaign created a system, called Quick Donate, through which supporters could give direct, monetary contributions to the cause via SMS and email. The system was such that after filling out an online form, supporters could donate money with a single action on their mobile devices. Quick Donate helped the campaign raise $650 million online, toppling the $182 million that Romney’s online initiative raised. While mobile fundraising initiatives are still in their inception, as advancements are made, the mobile platform will hold increasing importance in the endeavor to raise money.

Targeting demographics and expediting the fundraising process are just two of sundry examples where mobile has increasingly become indispensible in the political process. Others include registering voters online in their respective neighborhoods, advancing apps that convey essential information, and cultivating mobile forums where politicians can engage citizens in real time. And all of this is just the tip of the iceberg. As advancements in technology are made and political forces decipher how to best leverage them, we’ll see more innovative and dynamic implementations that mobilize the mobile community. Mobile is a key player and the time is now.

Now that you have some food for thought, weigh in and join the conversation about mobile’s influence in politics. Only through collaborative discussion will we advance knowledge and achieve enlightenment.